Is Upgrading Your DeWalt Power Tool As Easy As Picking Up a Battery Adapter?

I used to use a strong–quite strong, actually–Black & Decker 24v hammer drill for most of my day-to-day work in the cabinet shop and, truth be told, it was stronger and longer-lasting than anything I needed or ever had before. If you read some of my posts here on WG, then you’ll sometimes see my nostalgia leak through.

That drill was a workhorse for me. It not only slaughtered the performance of my colleagues’ older DeWalts, it even one-upped the new 18V Makita that was brought in. They commented often about the size and weight of the thing, as well as how ridiculously overpowered it was for the tasks we generally needed drills for. However, there were indeed times when my drill was the savior and shocked the other guys, and not only that, but I am also a big guy so I didn’t mind the heavier-than-normal weight of it.

All in all, I was quite proud of this cordless beast and it was one of the coolest purchases I ever made for myself.

Love of our tools’ performance is a beautiful thing, and as I became more and more accustomed to my B&D drill, I was less and less interested in giving it up. Actually, I never thought I’d have to–until the dreaded day came when its Ni-Cd batteries played out.

Long-gone were the days of using my drill at the shop for a week at a time without needing a charge. Suddenly, after a brief time period where I had gone back to school and wasn’t using my drill regularly anymore, the batteries just sort of gave up the ghost and couldn’t be recovered. I did my best to locate some more, both online and locally, but after acquiring a couple of 24V replacements which basically had the same longevity problem, I was left holding my drill and wondering if I would ever be this happy again, because I truly believed that I wouldn’t.

I’m sure you know that often times we aren’t quite ready to let go of our aging tools just yet, but future generations of tools from the same manufacturer don’t always plan easy solutions for us, and as their tech changes, our old favorites can get left in the dust. This actually reminds me of the new game systems which roll out a new platform and don’t allow for the previous systems’ games to be played anymore.

Man….that kind of stuff is a HUGE bummer!

However, some companies–such as DeWalt, the focus of this article–have responded in a way that allows for us to continue using some of those cordless tools we have grown attached to as if they are an extension of ourselves. Essentially, it means that if you can’t directly swap-out for a larger battery and despite the scarcity of the original power pack, there is still some truly great news for you:

A DeWalt battery adapter is available! 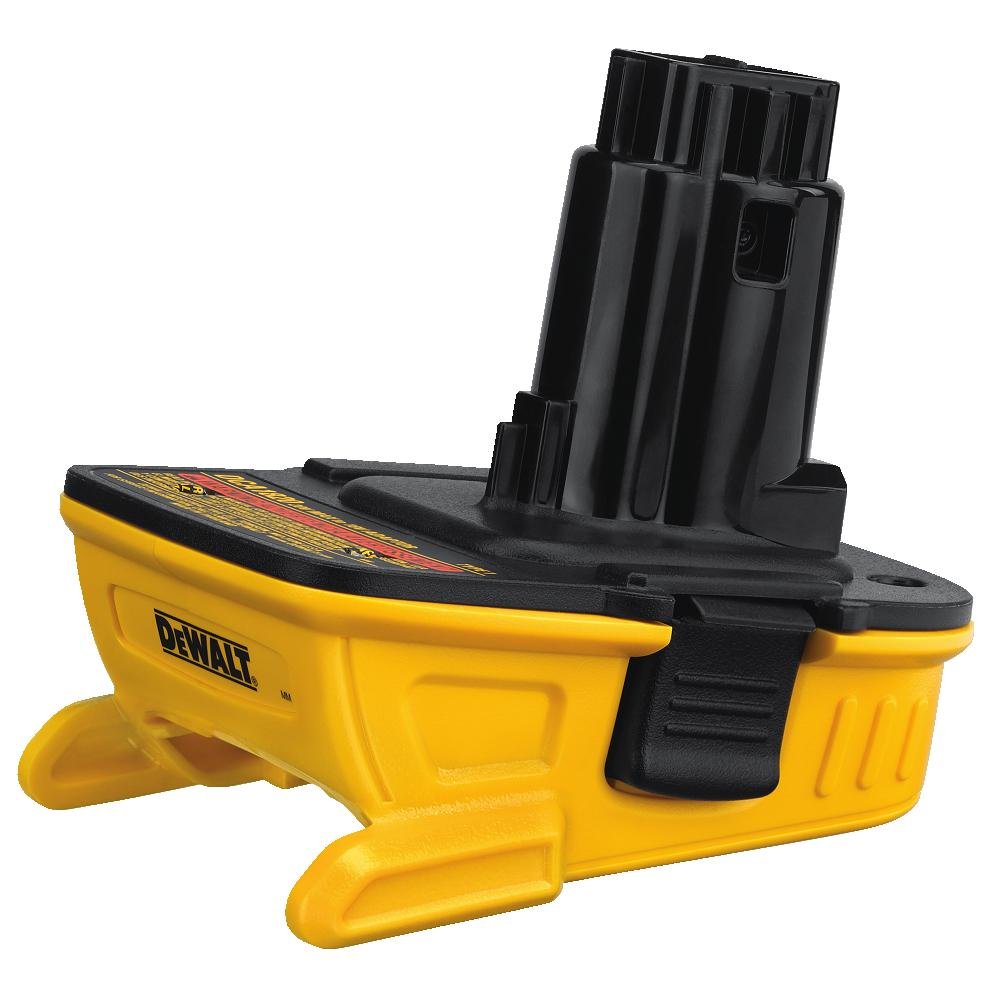 I think that basically any tool junkie, long-time holder and user of DW cordless tools or just plain, old fanboy should be excited over the Dewalt 18v to 20v adapter. For those of us who have some aging tools or just want more power for our 18-volt cordless drills, it is a very useful if not necessary accessory for our DW cordless power tools.

The DCA1820 (model number) has the latest lithium ion battery technology the company has come up with and offers a wide range of compatibility for the DeWalt lineup. Their range of tools which require the 18v to 20v capacity work just splendidly with this affordable battery adapter, and the limitations are relegated strictly to the XRP battery charger models.

The other thing is that if you are one of those who likes a wide range of portable or battery-powered tools, then this could really be a big addition for you. The De Walt tools variety has up to approximately 40 different portable tools which are 18v.

You should be happy to know that this particular DeWalt battery adapter just like James Bond in his natural element, wooing multiple women and all while working hard to get the job done: it can hook up with all of them.

There is some useful information to know about the voltage range, as well.

Since the Dewalt adapter’s range is 18v to 20v, it allows the user to vary the battery voltage needed. Not only does this make the adapter useful with more tools, it also lets users adjust the optimum voltage required by each tool. As a result of this foresight by the company, it’s possible for even low voltage tools to be used with the maximum 20v batteries in order to achieve more powerful tools. This is the feature that can really make your old tools, quite literally, have new life.

Have you ever seen a film where it appears that the hero or his love has died at the end, but then suddenly, new life is breathed into them and they come back, seemingly better or stronger than before? Well, it may not be Superman, but that’s kind of what to expect when you slap a 20v battery on your old 18v tools with this battery adapter: happily ever after, except without the romance aspect (unless you are truly in love with your tool set as I mentioned that I was before).

Another key point here to remember is that if you are thinking about buying this adapter before forking over the dough for a new power tool, then I think it’s important that you know what to expect. Your Old Yeller 18-Volt may seem like it’s due for a replacement but you can rest assured that the performance you’ll get out of this adapter plus a brand-spanking-new DeWalt 20-Volt battery will both surprise and please you at the same time.

What is the Compatibility of the DeWalt DCA1820 Battery Adapter?

The DW Adapter comes with 6 battery options, which include: 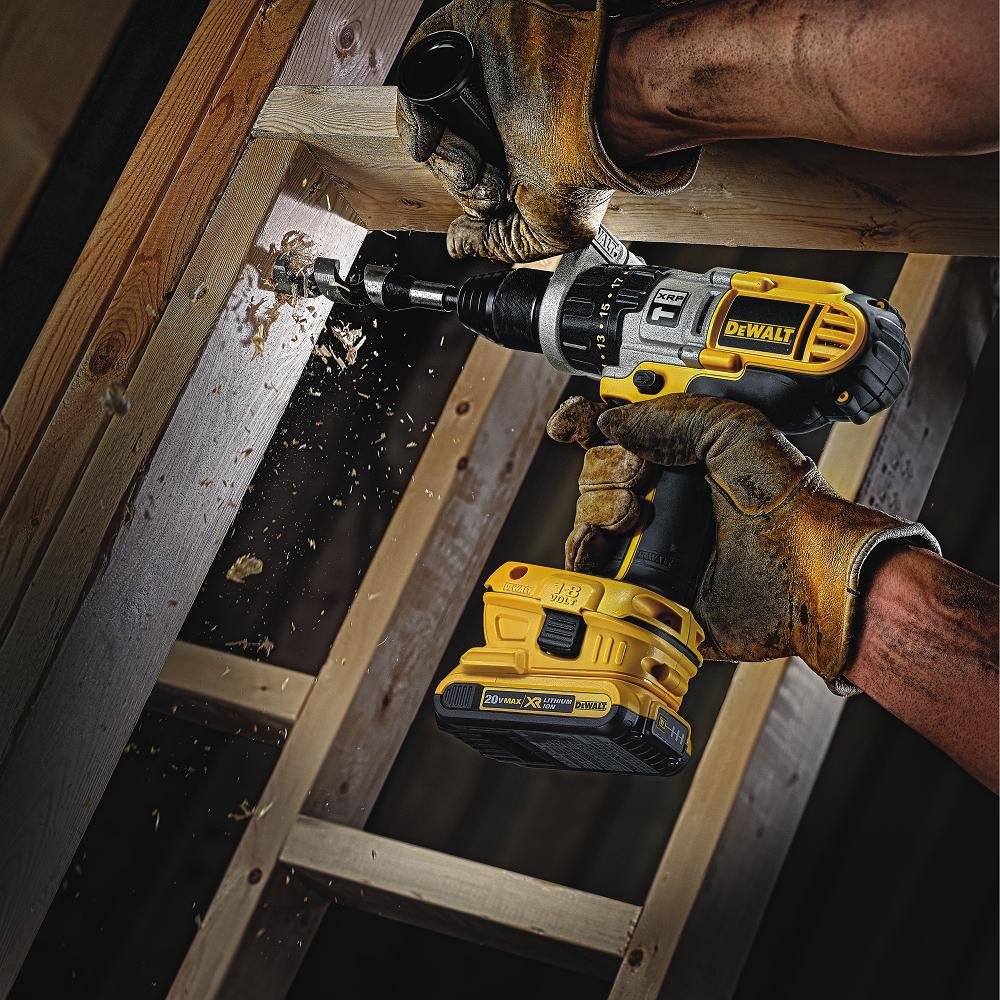 You should note that the Bluetooth batteries 2.0 Ah and 4.0 Ah can also be used with Dewalt’s 18v tools, so this definitely offers a little extra compatibility for you, as well.

Of course, there is also another reason to smile about this, because the reality is that your tooth won’t be blue at all—and neither will you! Isn’t that great? (but not as great as my jokes, right?). 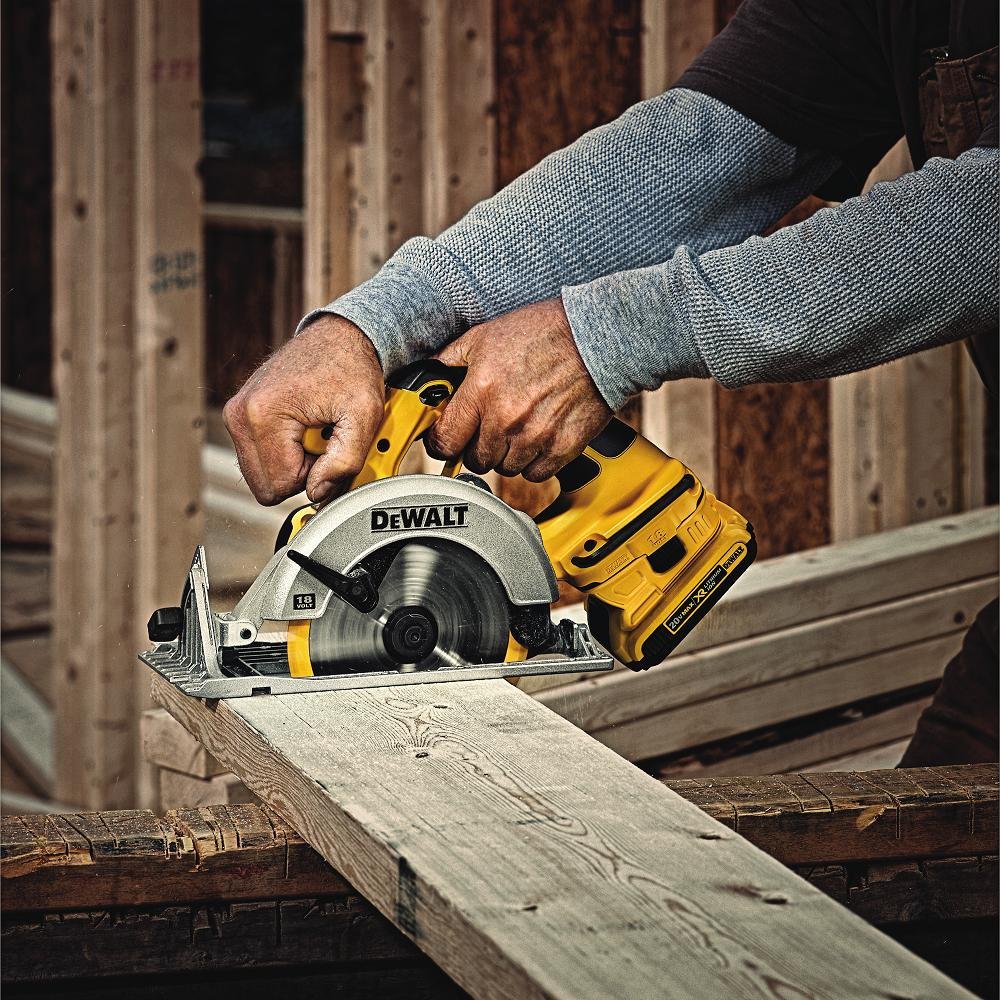 The short and long of it is that this is a very straight-forward product with a clear function: it enables the use of both 18 and 20-volt batteries in certain older cordless DeWalt power tools. The only main questions left to get solid answers to are “How good is it? Is the cost fair?” and “How compatible is it with the various tools?”

In short, this is what I believe:

If you are interested in learning more about using the Battery Adapter from DeWalt, feel free to watch it in use below. If you are sold and would like to pick it up, then you can definitely do just that right here.

Have a great week and thanks for stopping by!

To see it in action, check out the video below: